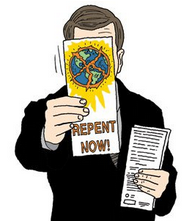 When I was a kid, I feared the apocalypse. But religion just angered my mother. When the pasty neighborhood Pentecostals approached us on the sidewalk, extending their damp pamphlets and their harbingers of doom, my mother would stick her arm out traffic-cop style and shout, “Get back!,” like she was warding off an attack by bears. I think it was probably the fear part of religion that angered her the most, which is ironic, because the fear part of religion is what affected me the most.

Until I first heard about Armageddon, I had no idea the earth was due to eventually open up like a giant anus and belch out mountains of fire, demons, and a colossal plague of awfulness. I became certain I’d have to weather the event, because no matter how many panicked pleas I made to Christ to come into my heart after that, my heart still felt pretty pagan. Plain and simple.

It was an immense relief to wake up each morning and see my little sister sleeping on the bottom part of our trundle bed. She was so strong and pure; if anyone got selected to be sucked up to paradise to avoid the apocalypse, it would be her. As long as she was still there, the apocalypse was at bay. She was like my canary in a coal mine.

I stayed afraid throughout my youth; my biggest fear was admitting I had fears at all. It had gotten into my head—probably put there by my fearless mother—that I should face my phobias. I overachieved in my twenties when I got a job as a flight attendant in the face of my terror of flying. I think this fear came about because when my parents first divorced, they each moved within a few miles of major airports—my father to LAX and my mother to San Diego, where I woke one morning to hear the earth open up and belch out mountains of fire and a plague of awfulness.

My sister was still in her bed, so it couldn’t have been the apocalypse. Instead it was the crash of PSA flight 182 into a quaint area called North Park. The crash flattened entire suburban blocks of property and left a massive swath of destroyed homes, charred debris, and mangled bodies in its wake. Not to mention the stories.

Because when a plane crashes into your neighborhood, you hear stories about it for years to come. Take the story (true) of the flight-deck recording, where a pilot’s last words were a calm “We’re going down” and “Ma, I love ya.” Or the story (false) that the crash was due to the pilot of a small Cessna who had a heart attack and thus was responsible for the midair collision. Or the story (exaggerated) of a Normal Heights man who, awakened by the crash, reached for his wife in bed to discover that her breasts were much larger than he’d remembered, then realized he’d grabbed a dead flight attendant who had fallen through the roof of his house. Or the stories (probably true) of the body parts and the blood and the “degloving” of victims. To explain that: Think of your skin as a glove, and to be degloved is to have everything inside of it suddenly set free. Plain and simple.

The kind of fear that erupts in a teenage mind from such a disaster is powerful, a solid thing. Praying did not abate it because of my annoyingly pagan heart. So instead I mentally jutted my arm out traffic-cop style and shouted, “Get back!” After years of this, I isolated my panic to takeoffs and landings, because statistically that is when most airline disasters occur. The in-between was fairly bearable.

Today I no longer work for an airline, but I fly a consistent fire drill between my home in Atlanta, my film agent in Los Angeles, and my publisher in New York. My favorite part is on cloudy mornings when the plane crests the darkness, and the sunrise slices the horizon like an incandescent laser of fire. On those occasions I feel my heart swell, because when I think about my child and my small home and my sisters and my two Dumpster pups and the other contents of my lovely wreck of a life—the beautiful in-between that could have been so easily degloved—I find myself kind of, like, needing to pray or something. Because I’ve found I don’t need religion to express fear or desire or confusion or whatever else people fall at the feet of deities to express. I’ve tried that, and no. What my pagan heart needs to express—and the need is so strong and pure—is gratitude. Plain and simple.