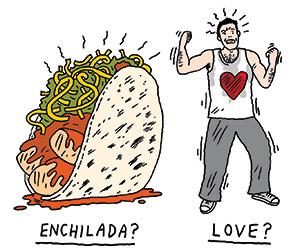 I was raised in a trailer two miles north of the Tijuana border. Or maybe that’s open to interpretation, because I wasn’t actually raised there, but I did live there for a while with my mother. Still, I’m fond of this part of my personal history because I think it makes me an authority on all things Mexican, especially food and tequila. Did you know, for instance, that the margarita cocktail was (possibly) inspired by a German bar patron named Marguerite? I bet you did not know that. I see your eyes are rolling back. It must be because you’re so stunned by my mastery of Mexican trivia.

When I first moved to Atlanta in the early nineties, you could not get a decent margarita unless you knew about Nuevo Laredo Cantina, which I did not. It had just opened in Home Park, which wasn’t even called Home Park then, and it was before social media, so how could you have known about it except by word of mouth? It took years for word of mouth to reach people. Word of mouth is the covered wagon of communication, but it’s all we had. So I languished in my studio apartment in Buckhead, begging the Americanized abomination of a Mexican restaurant next door to push the Slurpee machine off the porch and make me a real margarita.

“And what is this fruit cocktail you call ‘salsa’?” I’d grumble.

Today, though, it’s different. We’ve witnessed a culinary renaissance in Atlanta over the past few decades. Not only can you get a perfect margarita almost effortlessly, but there are, like, entire bars devoted to tequila alone. It has surpassed even my own snobby knowledge of stuff like this. Too bad I no longer drink like a house full of frat boys stranded in the desert, but hey, far be it from me to resent good fortune to future generations.

The food, though—now that is something in which I still partake. So when I go to a restaurant that bills itself as serving authentic Mexican food, and then they tell me that the word authentic is up to interpretation, I feel my Tijuana-trailer roots rear up.

“I didn’t order this,” I told the server.

“Um, you ordered the chicken enchiladas?” he responded.

“Yes, but enchiladas are wrapped in corn tortillas, not flour.”

“Our chef uses flour tortillas,” he said, giving that face servers use when, no matter how right you are, you’re not right.

Let me stop here to explain something: The word bitch is almost literally my middle name. Ten years ago, I wrote a book titled Bleachy-Haired Honky Bitch, which hit the top of the charts, got me on The Tonight Show, and made me quasi-famous for fourteen minutes. I don’t object at all to the moniker; in fact, I consider it open to interpretation. Plus it gives me a lot of latitude on how to behave in public. Often when people meet me for the first time, they almost sound disappointed that, in person, I’m not a raging human hemorrhoid after all.

But I am offended, for example, when someone serves me a burrito and calls it an enchilada. I know the correct definition of “enchilada.” It’s not so much that I was brought something different, but that an attempt was made to change my definition of something I know is right. And if we lose our definitions of what is right, then what the hell good are we?

Stuff like this matters to me lately. My girl is a teenager. I remember when I was her age; it was five minutes later (it seems) that I fell monstrously in love with a guy whose definition of love was a lot different from mine. His involved abuse, in various forms. I accepted it for a few years, and then I left him during a rare moment of clarity. He was furious. Evidently he had truckloads of bad treatment still in store for me, and here I’d gone and shorted him out of the right to use it.

He attempted to get me back by shouting repeatedly, “I love you!” Even some of my friends were frustrated with me. “See? He loves you! He says so,” they’d insist. Let me tell you, it’s very unsettling to be bullied by someone trying to get you to accept that love exists simply because he declares it does.

It stopped eventually, or it never did. Whatever the case, I stood my ground and was called a bitch because of it. “Don’t serve me a bowl of crap and call it caviar,” I told him. I know what love is. I know the proper way to treat someone you love. If nothing else, I hope my kid walks away with this in life. I want her to know that love is vast and real, that it has a correct definition, which is not up for interpretation.